Start a Wiki
Cleo Diller is a female poodle who belongs to Mrs. Diller.

She has purple fur and a pink bow in the middle of her forehead. She is an energetic, selfish, spoiled, sassy troublemaker who sometimes doesn't tell the truth, but remains loyal to her friends. She is a young, sweet beauty. Cleo is the opposite of Matt, that is why they are so attracted to each other. Her catchphrase is: "Have I ever steered you wrong?", which she inadvertently does immediately after saying this. After Cleo says that her friends usually say "well...yeah" and in make-believe games with Clifford and T-Bone, she portrays "the evil Fluffy-Face." She is one of Clifford and T-Bone's best friends.

Cleo can sometimes prove to be kinda pushy and sensitive. In the episode "Follow the Leader", Cleo wouldn't give up being the leader to Clifford or T-Bone. She sometimes can be hard to handle, but her friends don't mind. In the episode "Friends, Morning, Noon and Night", it is shown Cleo has a lot of stuff including pictures of Mrs. Diller and some pictures of herself as a puppy. Cleo has a tag in Clifford's Really Big Movie. She is one of the pets to have not appeared in Clifford's Puppy Days. 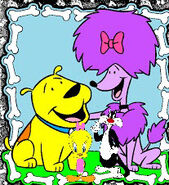 Add a photo to this gallery
Retrieved from "https://clifford.fandom.com/wiki/Cleo_Diller?oldid=14898"
Community content is available under CC-BY-SA unless otherwise noted.