Start a Wiki
Clifford Gunther Howard, also known as Clifford the Big Red Dog, is the 10-year-old pet dog (and best dog friends) of Cleo Diller, T-Bone Lewis and Machiavelli Handover and the titular protagonist of the series. He was voiced by Brent Titcomb in the 1988 series, the late John Ritter in the PBS series that aired from 2000-2002 and the movie, which is one of three films dedicated in his memory, Lara Jill Miller as a puppy in the prequel series, and Adam Sanders in the 2019 series. Clifford earned his massive size from the amount of love that Emily Elizabeth gave her pet.

Clifford is a helpful, outgoing and friendly dog. He will always help his buddies in their times of need and give them amazing friendly advice. However, he can also be gullible and naive and sometimes believes everything he is told.

Clifford was originally a small puppy, but is CURRENTLY a very big red dog, whose size sometimes gets him into trouble. He is sometimes tempted into trouble by his friends and those he meets. His size, like giants in medieval legends, is inconsistent—he is often shown as being about 25' tall from paws to head, but can appear far larger. Emily Elizabeth gave him a huge amount of love, which caused his big size. Clifford has a tag in Clifford's Really Big Movie. 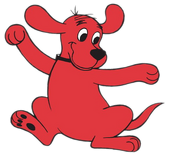 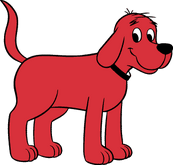 Clifford as he appears in the 1988 series

Clifford and Emily Elizabeth in their rebooted series on PBS Kids and Amazon Prime Video, and also on their website in 2019.

Clifford in his Artwork for Clifford's Puppy Days

Add a photo to this gallery
Retrieved from "https://clifford.fandom.com/wiki/Clifford_Howard?oldid=15804"
Community content is available under CC-BY-SA unless otherwise noted.