Start a Wiki
Mac (short for Machiavelli Handover) is an 8-year-old male blue greyhound belonging to Jetta Handover. In almost all Clifford episodes, he is friends with Cleo, Clifford, T-Bone, and of course, his sweet doggy girlfriend Tonya (possibly Charley's pet dog). But in the episode "False Friends", he wasn't their friend. His doghouse is full of prizes and awards. From the outside, his doghouse looks like it is normal sized but from the inside, it is big and blue.

Voiced by Cam Clarke. Although his owner appears, Mac is not in Clifford's Really Big Movie and does not wear a tag.

Mac likes to compete in dog shows. He has an inflated sense of his own importance. Mac dislikes some of the things Cleo, Clifford, and T-Bone like, for example, nose the can, he thinks it is too noisy. He would do anything for a tummy-yummy, which is a type of dog treat in the series.

In the episode "Promises, Promises", when Mac was mad with Jetta for not keeping her promise to take Emily Elizabeth to the coral cave, Jetta tries to make Mac feel better with a tummy-yummy. Mac comes to get the tummy-yummy and smiles. When Mac gets the tummy-yummy, he goes back to being mad. In the episode, "King Mac", he is blamed by Jetta for making a big mess that T-Bone actually made... Also in the episode "Teacher's Pet ", Mac wouldn't do any of the tricks his teacher at dog school told him to do unless he got a tummy-yummy for it. At the end of the episode, his teacher even gave him a "tricks for treats" award. 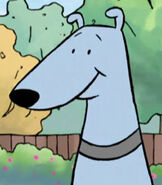 Add a photo to this gallery
Retrieved from "https://clifford.fandom.com/wiki/Machiavelli_Handover?oldid=15016"
Community content is available under CC-BY-SA unless otherwise noted.