T-Bone Lewis is a 6-year-old male yellow bulldog with a large appetite and belongs to Sheriff Lewis. He likes to pretend he is Super T-Bone, a caped hero. He is best friends with Clifford and Cleo.

T-Bone is yellow in color with orange spots over his back. Mac sometimes takes T-Bone seriously. Once in the episode "The Great Race ", he even mentioned T-Bone being the slowest dog on the island. Voiced by: Kel Mitchell.

T-Bone is sensitive to things. In the episode "The Ears Have It ", it is revealed that T-Bone is scared of loud noises and he wore earmuffs when he went to see the fireworks. He is cowardly and cautious. T-Bone was also scared of the dark but when he had to get Jetta's watch under the house, he got over it and he wasn't afraid anymore. T-Bone loves eating and sometimes feels overconfident. T-Bone has a tag in Clifford's Really Big Movie. In Clifford's Puppy Days, he chooses to sit out of the TV series along with Cleo, KC, and Mac.  He can be still seen as a cameo in the opening theme; otherwise, he makes no other appearances in the TV series. It’s implied that T-Bone has a crush on Cleo. 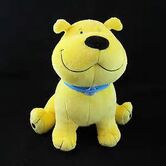 T-Bone As A Plush! 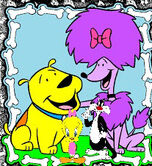 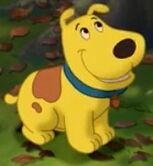 T-Bone in 2019
Add a photo to this gallery
Retrieved from "https://clifford.fandom.com/wiki/T-Bone_Lewis?oldid=15091"
Community content is available under CC-BY-SA unless otherwise noted.